Consultation on Professional Standards Regarding Sexual Misconduct by Physicians now open. Provide your feedback by January 31.

Pursuant to the Medical Act, S.N.S. 2011, c. 38 the College of Physicians and Surgeons of Nova Scotia will conduct a hearing to consider allegations of professional misconduct and/or incompetence regarding Dr. Manivasan Moodley.

The hearing will be held at the offices of the College of Physicians and Surgeons of Nova Scotia Suite 400, 175 Western Parkway, Bedford, Nova Scotia, B4B 0V1 commencing on Monday, February 24 at 9:30 am and continuing thereafter as directed by the Hearing Committee.

Given the recent news coverage, the College would like to better explain its approach to late fees.

The College is solely concerned with patient safety.

The College is governed by legislation, which is the law of the land. Our legislation requires that a physician’s licence be suspended if it is not renewed by year-end. A physician cannot practice medicine with a suspended licence. The legislation in each province varies, as do the approaches of each College, although all (or perhaps almost all) Colleges charge late fees.

The goal of a late fee is to avoid suspending the licences of physicians who, for whatever reason, unintentionally failed to renew. When this happens, the first week of January may have surgeries cancelled or closed clinics or Emergency Departments. In short, patient care is interrupted.

The College has explored multiple methods to reduce the number of physicians affected by late fees, from advertising to direct mail. Physicians receive weekly emails throughout the renewal period, both before and after the late fee deadline. Although there is annual variation in the number of physicians who are late to renew, the College has been unable to identify a method or combination of methods to eliminate all late renewals. The renewal schedule has not changed – all physicians in the province are aware that November is the month to renew licensure.

Reimbursement of late fees are seldom given, only in the most extenuating of circumstances. In the case recently reported, the physician is a uniformed officer the Canadian Armed Forces and was posted overseas throughout the renewal period.


Public inquiries can include requesting information about: filing a complaint, referencing a professional standard or accessing medical records.


This is a confidential line to discuss concerns regarding sexual misconduct by physicians. 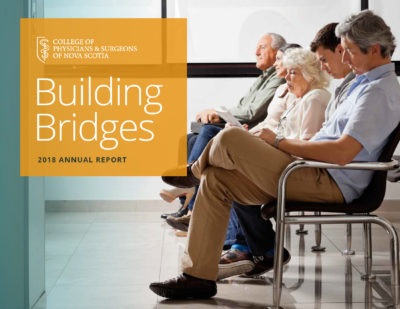 The College of Physicians and Surgeons of Nova Scotia serves the public by regulating the province’s medical profession in accordance with the Nova Scotia Medical Act and its regulations.

All physicians in Nova Scotia must be licensed by the College in order to practise medicine in the province.

The duties of the College include: